Jayinee Basu is a writer based in San Francisco—you can read her interview profile for The Write Stuff here. She writes interactive courses for sexual violence prevention in the East Bay, and is also a volunteer research assistant at the Memory and Aging Center at UCSF, where she aids research in neural network functions and frontotemporal dementia. Currently, she is finishing a pre-med program at UC Berkeley, and recently published her debut book of poems, Asuras. Here she’s interviewed by David Welper, leading up to our release party for the second issue of vitriol, for which she was one of the featured readers. 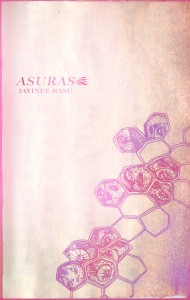 DAVID WELPER: Tell me about yourself. How did you get to where you are now with your writing?

JAYINEE BASU: I studied writing at UC San Diego with amazing instructors like Anna Joy Springer and Rae Armantrout and John Granger, and for one thrilling quarter, Eileen Myles before she left the university. My parents wanted me to have a “practical” major so I also majored in Political Science (which, ha ha, don’t do that probably). But most of my time and energy was spent on writing and studio art. I had some vague idea about maybe going to law school, which I applied to but decided against. I didn’t really start submitting to journals until a couple years after I graduated when I moved to San Francisco and became aware of Alt Lit. I liked the low barrier to entry in that scene and the playful, funny forms that came out of it. I did some readings around the Bay Area and started putting together a manuscript that I entered into Civil Coping Mechanisms‘ Mainline contest. I didn’t win, but Michael wanted to publish it anyway, which was extremely rad and nice of him. I feel like I am in a cartoon where you trip and fall off a cliff and magically land straight into the driver’s seat of a moving car and drive off into the sunset or something.

What are your (and your writing’s) strengths and weaknesses? How do you hope to develop as a poet?

I’m too inside of the things I write to be able to give a useful answer about strengths and weaknesses. I mean I could probably give you a million weaknesses but it would be whiny and boring to read. I don’t think I’m a particularly strong prose writer because I try to connect too many disparate elements that make the writing kind of wobbly and require a lot of input from a capable editor. So I’d like to get better at doing that. I think I’m decent at depicting sensory details and abstracting my own emotions enough to be able to write about them. I think in order to be a better poet I have to shed that instinct at some point though. I am not looking forward to that.

What is a poet? What are similarities between being a poet and being a doctor?  Or, how does being a poet enhance your roll in the medical profession?

I guess poets are just people who call themselves that but let me try to think of a non-copout answer: poets are people who write things that have little use other than to have been written. Like researchers whose research has few applications now, poets write things because the action itself is interesting and the exercise maybe will be valuable to someone at some point. We could probably use a bit more funding though.

I don’t really know much about what it’s like to be a doctor so I can’t answer that question. I think it helps to be curious about people and about how complex, dynamic structures work. Metaphor is a big thing in poetry and also when you’re thinking about body systems. But metaphor is so ingrained in every aspect of our language that it seems silly to say that either poets or doctors use it more than people in other vocations. I actually have difficulty switching gears from science to poetry and back. I’d guess that being a poet and being a doctor are more dissimilar than similar but I honestly have no idea.

You stated in an interview: “Being an immigrant, I am really sensitive to any senses of entitlement to a place, or to a place retaining a certain character.” I was wondering if you could lend some of your perspective on the Bay Area in regards to its historical literary “place” and “character” of socio-political tensions with the “establishment.” 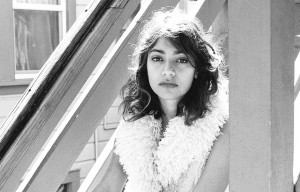 San Francisco is just the most beautiful place and I feel so privileged to live here. I think the whole book is really about the city itself, including the mythological quality of its politics. I wouldn’t say it’s overtly political in the way the anthology It’s Night in San Francisco but it’s Sunny in Oakland is, but the sense of helplessness I feel interacting with the very poor or very ill I think is represented in Asuras in poems like “Bunny”. It’s a dangerous feeling, to feel that you are unable to change anything. As a way to protect your psyche you start to turn a blind eye toward things you shouldn’t. You wonder how much longer you yourself can actually afford to live in the city and do you really want to spend your days feeling animosity toward the powerful? That’s a bad impulse I wanted to record in the book, even if just as a reminder to myself. But yeah, the literary community here is very inclusive and welcoming to the point of being dorky, which I’m into.

In reading Asuras and a bit about you online (modern technology and social media being one of the issues you address in the book), I see that you are influenced by some of the greats… Notley (one of my faves), Myles, Rauschenberg to name a few. Are there Bay Area poets and writers whose work you’ve gotten acquainted with and admire?

Oh definitely. I really love Ben Mirov’s poetry. It’s so depressing and funny and haunting. I also really like Brian Ang’s work which when you hear him read it is just like very powerful, very kinetic. Lucy Tiven, though in L.A. now, has a really good self-deprecating and sweet voice. And I always enjoy watching Zack Haber read. Also my good friend Matt Takaichi, while not a poet, is an incredible photographer whose work everyone should see. Tooth’s dreamy experimental films make me feel like I’m on a different planet. How many of my friends can I hype here, reasonably? I have a pretty long list.

When I pick up a book of poetry, I usually flip through the pages to get a visual of the poems on the pages. A lot of times I see books of poetry in which the poems are almost all visually and structurally monotone as if trying to get a cohesiveness with the poems. This seems like a minor issue, but I admire how the poems in Asuras are visually different. You’re not afraid to think about the connection between how a poem “looks” and what it’s “saying.” Example: the poem “Veteran,” with its words spaced out floating on the page… and on the very next page the reader gets “\\A Culminating and Impending Desert\\” which is a big block on the page. Can you comment a bit on this variety?

I wish I could be closer to the actual bookmaking process because then I could take that impulse way way farther than I have in this book. I wrote a lot of concrete poems in the past with a typewriter, which allows for a lot more control but also a lot more accidents in the marks you can create on the paper. I like making visual art with my hands though, not a computer. With this book I wanted to stay away from graphic designing anything so I tended to be pretty conservative with the formatting. My editor nudged me toward being more playful with that stuff so some of the formal weirdness you see is a result of me taking his advice. But some of it is just how I imagine a poem to look in my head. Shapes and space and sequencing are important to me because it determines how the book breathes.

In “I Peered Through a Dark Hall,” you state “I can’t read a sen/tence anymore it takes/too long. I like poems//they tell me when to/breathe. The internet is/ruining me.”  Do you think, because of the internet and how social media has changed our use of words, that poetry has tried to keep readers’ or audiences’ attention by using shock value?

I haven’t noticed poetry becoming any more shocking due to the internet. If anything it has allowed more mundane experiences to share the stage with big experiences, so content made just to be shocking kind of gets buried or made fun of. And if the fallout from Plain Wrap Press’s We’re Fucked is any indication, I think most people are pretty tired of edgy bro lit at this point. That’s not to say people aren’t still making it, but I just haven’t come upon much of it.

Another theme I connected with was the sense of emptiness or death of some sort. Even in the first piece, “Your Future Starts Here,” the pig die[s]. Other poems in the book contain phrases such as: “emotionless” … “empty pool” … “lack the dimension.” Perhaps a personal question, but do you find yourself looking to fulfill something, currently? What is it? What knowledge are you seeking in the next few years? Or… what’s next for you as a poet? Another book I hope… as you drive off into the sunset in your cartoon!

Contemporary aesthetics involves a lot of empty space. The gallery wall, the unadorned Adidas sneaker, the clean web design. Subtlety and discretion signal good taste, which signals wealth and education. I am not a minimalist but I still feel a pressure to be more restrained or refined, to be impossibly clean in both art and ethics. It leads to a lot of sitting and staring off into space and feeling bad and thinking about death.

There is so much information that I don’t have. There are miles of empty space between events I remember, probably incorrectly, and those spaces only increase with time. I struggle to write a coherent narrative of my life. With poems, as with photographs, it’s okay to say here is a frame and here’s some stuff inside of it. And that’s the entire universe of the poem. I like modular things like that. I think I want to make an encyclopedia of some sort next.

David Welper’s latest book is Lookbaby (BigMileBooks). He has an MA from Wayne State University. His work appears in Cricket Online Review, Rivet, Red Fez, Denver Poetry Map, and more. He’s been a featured reader in NYC, Detroit, and the Bay Area.