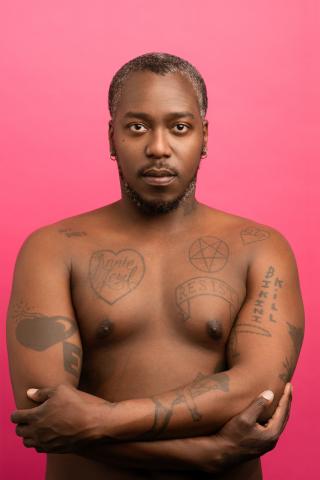 Brontez Purnell is a writer, musician, dancer, filmmaker, and performance artist. He is the author of a graphic novel, a novella, a children’s book, and the novel Since I Laid My Burden Down. Recipient of a 2018 Whiting Award for Fiction, he was named one of the 32 Black Male Writers for Our Time by T: New York Times Style Magazine in 2018. Purnell is also the frontman for the band the Younger Lovers, the co-founder of the experimental dance group the Brontez Purnell Dance Company, the creator of the renowned cult zine Fag School, and the director of several short films, music videos, and, most recently, the documentary Unstoppable Feat: Dances of Ed Mock. Born in Triana, Alabama, he’s lived in Oakland, California, for over 18 years. Photo by Beowulf Sheehan.

Brontez performed in the premiere of Better Ancestors on January 4, 2021:

Brontez invited Melissa Merin to perform in the subsequent show, on April 5, 2021.