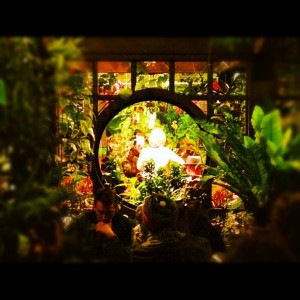 Our show yesterday at the Conservatory of Flowers was even more fun than we thought it would be. Pictures, videos, and a transcript of the show will all be online soon, but we’d like to thank the many people who made yesterday what it was (and we think you should know them):

Huge thanks, first, to Morgan Davis for having us; to Viracocha and Andy P. for helping us with our tech setup; to everyone who brought food for the picnic; to Ash Reiter and Quijeremá for setting such a wonderful mood (follow those links for a good time) (help Ash with their Kickstarter campaign—only three days to go, and they’re almost there!); thanks to Todd Brown for the beautiful artwork that adorns this month’s books and j. brandon loberg for designing them so tastefully; to Lagunitas for putting so much love into their brews and, no less, into the community; to Kristen Kramer and Ceri Bevan for making literary mixtape #34; to each and every person who stepped up and helped with the execution:

Is that overwhelming? So many people made that show what it was, and we’re grateful for every single one of them!

As with each month, we just met half of last night’s readers last night (!) and hope to get to know them better. Our whole board has formed from people who first submitted to read (Charles, Chris, Josey, Kristen, and Meghan—I met every single one of them through Quiet Lightning, and now look at us: friends!).

If you’d like to get involved somehow, get in touch: volunteer [@] quietlightning.org (Josey originally volunteered to do PR and, just last month, as a result of the work she’s been doing we voted her onto the board).

Random Play: On September 30th we’re doing a free show at the Red Poppy Arthouse! This will be the second installment of our new Random Play series, and part of the monthly ItCH mixer (which means, among other things, it’s a potluck and you’ll get to meet some of the other artists behind the ItCH project—this is how we met Quijeremá, for instance).

Litquake: The final show of The Greenhouse Effect, this lovely three-show series at the Conservatory of Flowers, will be on Monday, October 8th as part of Litquake. I happen to think last year’s show was one of our greatest, and you definitely don’t want to miss this one! Go ahead: check out our readers.

Submissions: We’re accepting submissions for our November 5 show through the end of Wednesday, October 17th.

I know I’ve said it this whole time, but thank you: for coming to the shows, and – however you do it – for supporting Quiet Lightning and the generation of literature. Until very soon,