Water Under the Bridge is a timely portrait of the city of San Francisco as told by a diverse group of people trying to build or maintain a life here. Historically a place that symbolizes the pursuit of dreams, and one that currently also represents the nation’s rapidly growing disparity between the rich and the poor, with skyrocketing rents, widespread displacement, and an ongoing culture war, San Francisco defines its citizens as much as they define San Francisco. Through a unique spread of authentic experiences, Water Under the Bridge asks: what kind of home is San Francisco, and what kind of home is it becoming?

a timely, moving, and engaging film about San Francisco and San Franciscans that beautifully reflects the spirit of our city, its citizens, and the phenomenon that is Quiet Lightning Each of the first three screenings included live performances blending storytelling specific to that host city with visual art made by other artists in conjunction with the stories—a collaboration with Story²:

Christopher Moore is a local sound-performance artist and contributing editor of KEEPEYES magazine. Drawing from experiences while living in San Francisco, his works have sampled the City’s soundscape while juxtaposed with open form poetry. For Water Under The Bridge premier, Christopher will be performing “Passing of the Storm”: a sound-poem that subjectively reflects the artist’s schizophrenic perception of the ever-changing City. 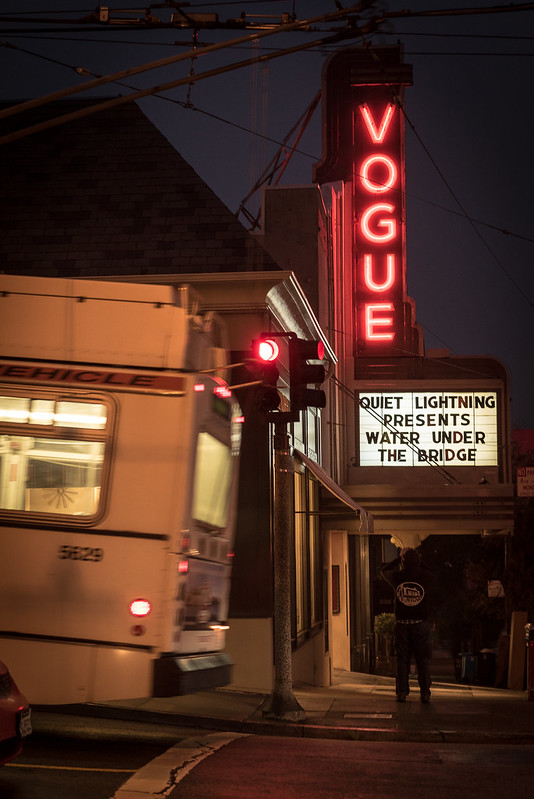 Katie and Mila had the lovely pleasure of spending a morning and afternoon in life of Andrew McKinley, as he walked from his apartment on 18th street to Tartine Bakery and through the Mission to his warehouse at Toxic Beach, discussing in the travel the many changes he’s witnessed and experienced in his 25 years in San Francisco’s Mission District. The following morning, Katie and Mila hazarded hospital conditions to film Katie discussing her coming-of-age at UCSF when her mother died in 2009. Hearty and heavy week. Mila and Katie feel like surfers riding 20-ft waves, like hangliders off tornados, like brown bears at an eating contest!! Their second and third shoot, with Mickey Costello and Winnie Chang, respectively, went spectacularly. Up at 4:30 AM to catch the dawn in Golden Gate Park, they interviewed Mickey Costello, 4th generation San Franciscan, former track star and dream facilitator. After Golden Gate Park and Sutro Baths, Mila and Katie napped at a café in the Richmond before driving over to Ghirardelli Square to meet up with Winnie Chang, the unofficial ambassador of San Francisco. Winnie Chang introduced Mila and Katie to all the cable car drivers, having grown up with them in Nob Hill, and told them of how she feels about San Francisco’s changing currents amidst the roar of drivers on break, and exclaiming tourists drunk off Lombard street. We’ve embarked!! Water Under the Bridge began filming at Heron’s Head in Bayview. Situated between the Recycle Center at Pier 96 and Hunters Point, six pool animals made their way into the summer Bay waters for a casual party, drifting slowly towards the open ocean. First image is a still; images 2 and 3 courtesy Vivian Fu